The higher state of meditation is called samadhi. Its importance has been told in all religions like Hindu, Jain, Buddhist and Yogi etc. When the seeker is completely immersed in the meditation of the object and he is not aware of his existence, then he is called Samadhi. In the Yoga Sutras of Patanjali, Samadhi is described as the eighth (final) stage. 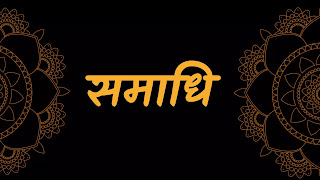 Wisdom emerges after samadhi and this is the ultimate goal of yoga. The last and seventh means of Hatha Yoga practice is Samadhi. At this stage, the meditator merges with the object of meditation, then the final state of Vritti Nirodha is called Samadhi.
Samadhi is timeless which is called salvation. This salvation is called Kaivalya knowledge in Jainism and Nirvana in Buddhism. In yoga it is called samadhi. It has many levels. Moksha is a condition which cannot be called mood.
Samadhi is the last stage of yoga. Samadhi is attained when a person, after doing all the yoga practices, takes away the mind from the external objects and starts meditating while meditating continuously.

The person who attains samadhi has no desire for touch, taste, smell, form and words, and he does not feel hunger-thirst, cold-heat, honor-insult and happiness-sorrow etc. Such a person attains immortality by becoming full of power. His cycle of birth and death ends.

Moksha or samadhi means to become a witnessing person free from atomic atoms. Neutral or Sthitaprajna means to become supremely stable, supremely awake. The distinction between the knower, the knowledge and the known is erased. In this lies the ‘sense’ of being supremely powerful, where there is neither hunger nor thirst, neither happiness, nor sorrow, neither darkness nor light, neither birth, nor death, nor any influence. Freedom from all kinds of bondage. Ultimate Freedom Superman or Superman.
The meaning of complete samadhi means salvation, that is, the creature has to be freed from the cycle of birth and death to become self-realized and self-realized. Samadhi is a subtle state of mind in which the mind is completely absorbed in the contemplation of the object. The person who attains samadhi has no desire for touch, taste, smell, form and words, and he does not feel hunger-thirst, cold-heat, honor-insult and happiness-sorrow etc.

तदेवार्थ मात्र निर्भासं स्वरूप शून्यमिव समाधि।।
न गंध न रसं रूपं न च स्पर्श न नि:स्वनम्।
नात्मानं न परस्यं च योगी युक्त: समाधिना।।
Meaning: While practicing meditation, the seeker reaches such a state that he no longer has knowledge of himself and only the goal remains, then that state is called samadhi.
In the state of samadhi, all the senses are absorbed in the mind. The person becomes absorbed in samadhi, then he does not have knowledge of juice, smell, form, word these 5 subjects. He has no worries about his own, strangers, insults etc.

When the breath is completely under control and the mind becomes stable and balanced, then it is called a state of samadhi. Holding Pranavayu for 5 seconds is ‘Dharana’, concentrating the mind on a subject for 60 seconds is ‘Dhyana’ and samadhi is the continuous restraint of Prana for 12 days.
Formula 17:
वितर्कविचारानंदास्मितारूपानुगमात सम्प्रज्ञातःवितर्कानुगम समाधि वितर्क
Where there is a special logic in the mind to know the truth and to see the world. There can be three types of reasoning – logic, kutarka, vitarka.
Kutark means wrong reasoning, in which the intention itself is wrong. In such a situation, the only purpose of reasoning is to find fault in the other, you know within yourself that this is not true, yet through logic you prove that point right. For example, with half the door open means half the door remains closed; So with the whole door open means the whole door closed! God is love, and love is blind; Therefore, God is blind!
Vitarka is a special type of reasoning, just as we were understanding dispassion logically, but in this way the consciousness of listening and understanding was being affected, consciousness has been raised by such special reasoning, you are in a different state, this is Samadhi. Is.
Samadhi means equanimity, ‘dhi’ means intelligence, that part of consciousness through which you understand. As we are all in a state of trance now, we are understanding consciousness by a special logic.
Logic can turn either way, you can put logic this way or the other way, anywhere, logic has no faith. But the argument cannot be reversed.
Just like if someone dies and you are standing there, suppose you are not emotionally attached to them, now you know that this person is no more and this is the ultimate truth. In such a moment your consciousness is in a different state.
Just like when a movie ends, there is a sense of something ending, when people come out of a cinema hall, you will see that everyone comes out of the same state of consciousness. When people come out of such a music festival, there is a feeling in all of them that something has ended. Even after a camp is over, people return to a state of consciousness, that all is over.
At such a moment there is a special logic in the mind, an irrefutable logic, which automatically comes into your consciousness. Everything is changing, it has to change. Everything has to end, such discourse lifts the consciousness. For this there is no need to sit with eyes closed, even when eyes are open, such a feeling of ‘I am consciousness’ and everything is empty, fluid. This whole world is a quantum mechanical field, whatever it is – it is a debate.
The whole science is based on logic, the existence of a quantum field of the world is irrefutable, such a state is vitarkanugam samadhi.

Anandanugam samadhi means a state of bliss, as when you wake up by doing Sudarshan Kriya or you get blissful by singing bhajans in a satsang, then the mind is in a different state of bliss. In this way consciousness is raised, but there is bliss. Such a blissful state of meditation is anandanugama samadhi.
The samadhi that resides in Ananda is Anandanugama Samadhi, which is also a meditative state. In the same way, in Vicharanuga Samadhi you are with some coming and going experiences, feelings and thoughts. When you are in samadhi with an irrefutable vitarka, that is vitarkanugam samadhi.